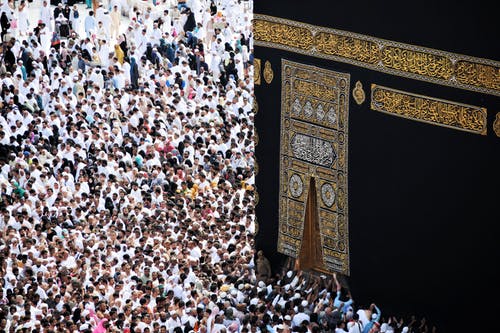 The Hajj (sometimes spelt Hadj, Hadji or Haj also in English) is associated with the life of Islamic prophet Muhammad from the 7th century AD, but the ritual of pilgrimage to Mecca is considered by Muslims to stretch back thousands of years to the time of Abraham. During Hajj, pilgrims join processions of millions of people, who simultaneously converge on Mecca for the week of the Hajj, and perform a series of rituals: each person walks counter-clockwise seven times around the Kaaba (the cube-shaped building and the direction of prayer for the Muslims), trots (walks briskly) back and forth between the hills of Safa and Marwah seven times, then drinks from the Zamzam Well, goes to the plains of Mount Arafat to stand in vigil, spends a night in the plain of Muzdalifa, and performs symbolic stoning of the devil by throwing stones at three pillars. After the sacrifice of their animal, the Pilgrims then are required to shave their head. Then they celebrate the three-day global festival of Eid al-Adha.[14][15][16][17]

Muslims may also undertake an Umrah (Arabic: عُمرَة‎), or “lesser pilgrimage” to Mecca at other times of the year. But this is not a substitute for the Hajj and Muslims are still obligated to perform the Hajj at some other point in their lifetime if they have the means to do so. [18][19]